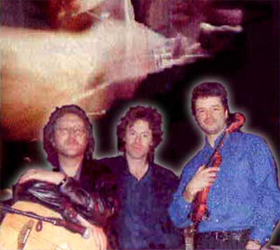 Established in 1992, they have gained a reputation as the most sought after band of their kind in the Eastern region. Their huge and versatile repertoire enable them to be much more than just a ceilidh band and make them perfect for any occasion and celebration.

This Band's strength lies not only in their musical ability and experience but also in the wide variety of styles in their repertoire. From traditional reels and jigs from the British Isles to Eastern European folk tunes, light jazz and a whole collection of songs spanning the last fifty years, they can entertain people from any age group, with their energetic style, whatever the function.

Since forming in 1992 they have been booked hundreds of times & played to thousands of people. They are favourites for weddings, parties and anniversaries but are equally at home on the large concert stage, a folk festival or indeed a front room.